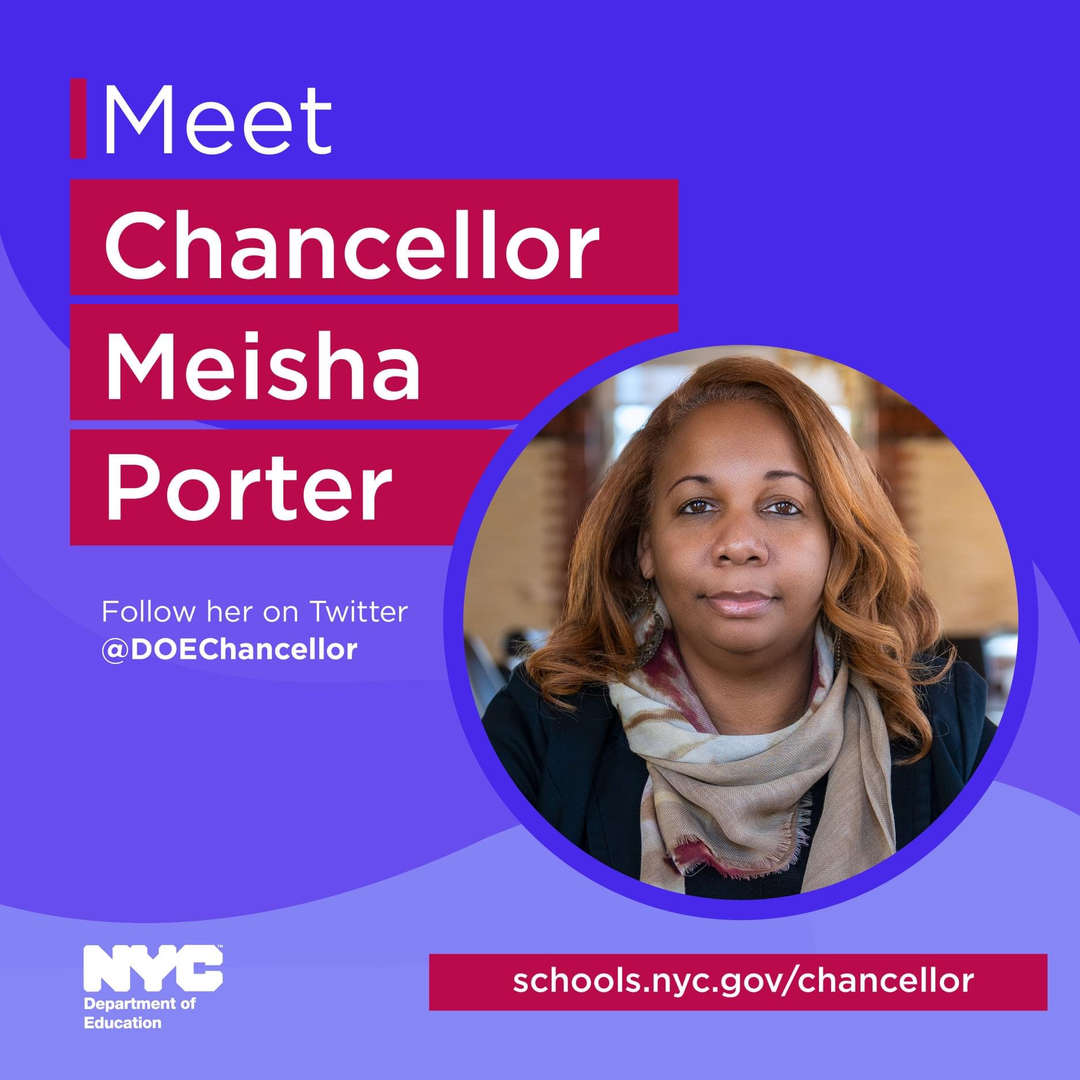 Meisha Porter is Chancellor of the New York City Department of Education, the largest school system in the nation. Appointed on March 15, 2021, she is the first Black woman to lead the education of the system’s 1 million students in over 1,800 schools. A lifelong New Yorker and product of the City’s public schools, Chancellor Porter has climbed every rung of the DOE’s professional ladder over nearly 25 years: community coordinator, English teacher, assistant principal, principal, district superintendent, and Bronx executive superintendent before ascending to Chancellor. Under her leadership in her most recent position, graduation rate increases in the Bronx outpaced the gains of other boroughs. Her vast experience in the system makes her the ideal leader to advance us toward fully reopening our buildings to all students while accelerating progress toward equity and excellence for all.

Chancellor Porter’s lifelong journey through the New York City public school system has steeped her in the myriad complexities, challenges, and opportunities across the City’s vast educational landscape. Just as her own local public education enabled her to achieve success, she is driven by the mission of enabling all students to realize their dreams.

Born in Far Rockaway and raised in Jamaica, Queens, Porter graduated from Queens Vocational and Technical High School before enrolling in Hunter College. She started her career as a youth organizer in Highbridge, then helped to conceptualize and launch the creation of the Bronx School for Law, Government, and Justice, the first Urban Assembly school. That was where she served 18 years as community coordinator, English teacher, assistant principal, and ultimately principal.

Porter then spent three years as Superintendent of Bronx District 11, which includes neighborhoods that span the North Bronx. In 2018, she was promoted to Bronx Executive Superintendent since 2018, leading the entire borough’s 361 schools, the New Visions Affinity schools and 235,000 students across community school districts 7 through 12.

A recipient of the National Association of Negro Women’s Sojourner Truth Award, Porter has been a Columbia University Cahn fellow and an Aspen Institute fellow. She has taught at CUNY as an adjunct professor and participated in the Harvard University National Institute for Urban School Leaders and is a member of the Fordham University – Carnegie Foundation iLead team.

Porter received her Bachelor of Arts degree in English from Hunter College, concentrating in Cross Cultural Literature and Black and Puerto Rican Studies. She later received her Master’s Degree in Administration and Supervision from Mercy College and completed her School District Leader certification through the NYC Advanced Leadership Institute. She is currently pursuing a doctorate in education at Fordham University.

Get real time school updates on your mobile device with eChalk Notify.

Connect with code OQQ0WA to get instant alerts or log in with your eChalk user account for the latest updates from all your classes and groups.